Status
Not open for further replies.

Ban appeals are for when we have made a mistake, or there has been a significant change in the circumstances.
These are the only reasons a ban appeal would be accepted. Appeals for "apologies" or just admitting you did wrong will be instantly denied.

Staff who banned you : lurnn

Staff who dealt with you : lurnn

Staff who have warned you previously : none

Why do you think you were banned?(what you think the admins thought) : This trialmod came to me and said I was hitting mobs from my back.

What is your explanation of this reason? So it was some day ago, I decided to go inside the pit since someone did open it, I started to farm the mobs & when I was tired of it and went inside my base to farm, I got accused of "mobaura" cause Lurnn told me I was hitting mobs from my back which isn't true since I don't even use a hacked client. He told me aswell that he did record the whole thing, So I would be highly appreciated to see the footage of me being inside the pit & I hope he got the footage since he said he recorded the whole thing. If he don't have it, I'd just assume that he's a corrupt mod and a liar & a higher staff should talk to him with his actions and really see if trialmod is his place to be.

Why should we unban you? because I really didn't do anything wrong, I didn't use some kind of mobaura which he accused me to do.

What measures will you take to prevent this from happening again? It will never happen since I didn't even do it at the first place, the whole situation is just a mess thanks to lurnn.

How can we trust you again? You could trust me because I haven't done anything wrong and i'm just a normal player who recently came back from inactivity. Been here since april 2017.

What else would you like to say to the admins who will review this case? Take a look at lurnn's actions in the future.

For one you most certainly hitting mobs that were behind you I saw this myself, now incase this happened because of lag I didn't ban you on the spot.
I asked to screen share you and you refused this was fine, but when I asked you to type "." In chat, you simply couldn't and you even told me why you couldn't because it told you it was an unknown command. Because on many hacked clients you can't type "." I felt the fact that I saw you using mob aura and you could not type "." in chat was sufficient evidence, most people would have just banned you for the mob aura on the spot.

VIP+
I told you in sarcasm way that it's "unknown command" since I have had a client in my younger days. Even you did say some names of hacked clients, what makes me sure that you aren't using one? Stop being so selfish and show me the video that you did "record" and I wanna see the proof, and stop dodge this question away. Since I'm 100% sure that you'd just straight up lied to me about the footage. You don't have any video of me, don't you?

Staff member
Moderator
MVP++
PvP Tournament Winner
2021 Gold Founder
When a staff member thinks you are hacking, why would you "sarcastically" go along with it, as for the video I had Netflix open so shadowplay didn't work. But we don't need video proof to ban players as long as we see it ourselves which I did
As I saw you hitting the mobs from all sorts of directions. Next time when you are accused of hacking don't "sarcastically" go along with it.

Staff member
Admin
MVP++
In the future, if a staff member is asking you to prove you're not hacking, it would be in your best interest to comply, and don't "joke" about actually having hacks. This appeal has already been denied, I'm locking the thread. 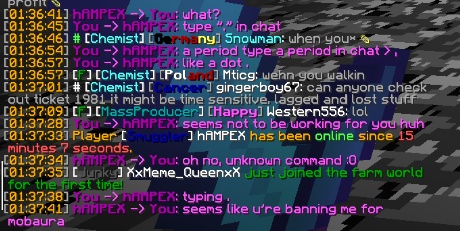 Status
Not open for further replies.

Total: 11 (members: 5, guests: 6)
About Us Welcome to MCDrugs! The longest running drug server & pioneers of the gamemode
Server Store Store
Copyright © MC-Drugs 2021. All Rights Reserved. We are not affiliated with Mojang AB.
Top