Dismiss Notice
Please feel free to join our website today! We're happy to help with anything, or maybe just to have a discussion or introduce yourself!

​
Today we're announcing an exciting new feature on the server titled "The Expansion". The map will now expand twice as often, but half as much each time. Behind the map border now lies new cartel networks that will surely be fearfully contested by all of the rival factions for some of the new exclusive loot and legacy donator items.

Every second week just after DP time, The Expansion will reveal the many new unique buildings that contain exclusive loot and challenging bosses which lie behind the world border. We hope that every second week the top factions (or brave, but greedy individual players) will battle it out to claim some of the best loot on the server.

We don't have much more to say at this time, other than to let you know to be there next week for the first appearance of "The Expansion". We hope to see you all there to fight against the best for your cut of the cartels endless loot.
Continue...
Mount Update
3 1,766 by Dakotaa : Aug 2, 2018 at 3:09 PM

Since we added Horses to MCDrugs over a year ago, they have completely changed the gameplay of the server. They have always been a very useful tool for druggies and police. The horse system we have been using, however, had a lot of known bugs and it was very easy to lose a horse that you paid $6 000 000 for. There was also not much room for customization.

So, we've got an entirely new mount system. Horses work the same way, and run the same speed, but are now managed through a GUI. Instead of a saddle item in your inventory, you will now do /mounts to list the mounts you own. A mount can then be spawned by left clicking the saddle. With this system, it is impossible to lose your mount by dying or accidentally going off of duty as police.

This also allows much more cosmetic customization with the mounts. The Mount Skin Crate has been added, containing 32 mount "skins", unlocking each allows you to change the mount you ride into a different animal/monster. There is also the possiblity of sound effects and particles from mounts, those will be coming in the very near future.

If you have a physical saddle from the old horse system, please make a ticket ingame, and keep the saddle in your inventory. An admin will take the saddle and transfer your horse into the new system, along with its level. Unfortunately, we are not going to be having mules in the new system, but we will buy the mule saddle back from you for its original price.
Continue...
Store Overhaul Announcement
5 2,571 by Dakotaa : Jul 9, 2018 at 1:22 PM

Quick summary: On July 27, our Buycraft store will be completely overhauled to create a more fair gameplay experience for those who can not buy things. Anything giving an unfair advantage will be discontinued, but any of these things that you currently own will stay on your account forever. You have until July 27 to purchase any of the existing packages on our Buycraft, including crate keys, ranks, and MCDrugs Premium in order to keep the current perks offered by them forever. You can purchase donator rank vouchers and save them for later, redeeming the current perks after July 27. Lifetime Premium can be purchased to keep the current premium perks forever. A "Crate Key Token" has been added to the store. If you buy this before July 27, it can be traded in for any key in the future similar to Tag Crate Tokens, or given to Dakotaa or spalw to be saved for a future map. Finally, you can purchase store credit that can be saved, and spent on pre-overhaul perks after the overhaul, like crate keys.

Since the beginning of MCDrugs, we have always aimed to create a fair experience for all players, trying our best to minimize "pay to win" in our store. As our player base increased over time, and we had more players willing to donate to keep the server running, we were able to drop more and more of our unfair donator perks, such as overpowered armour, plots, and the ability to directly buy ingame money.

With the success of the new map and the record amounts of players, we have decided that it's a good time to make some changes to our store. With our highest player count yet, it's clear that we will be able to continue to run the server by only selling perks that do not give a gameplay advantage to those who have the money to buy them.

After months of speculation and anticipation, the 2018 map reset is only a few hours away...

Before all the news, we'd like to greatly thank everyone who helped out with the new map. This includes those who helped build, gave suggestions, and helped test. It could not have been as awesome as it is without all of you.

Our focus with this year's reset was to refine the Drug theme that we have developed. You won't see many huge changes to gameplay over last map (unless you join the police), but we can guarantee that your gameplay will be much smoother than last map. We've got some much better server hardware, and we're hoping to see almost no lag, even with 100+ players, with much better performance than last year's reset. Now let's get into some of the changes you'll be seeing with the new map.

Spawn
As always, we've made a completely new spawn world from the ground up. We chose a totally new theme this map, a western/mesa/desert canyon. Here's a map of the spawn you can use to familiarize yourself with the new layout: 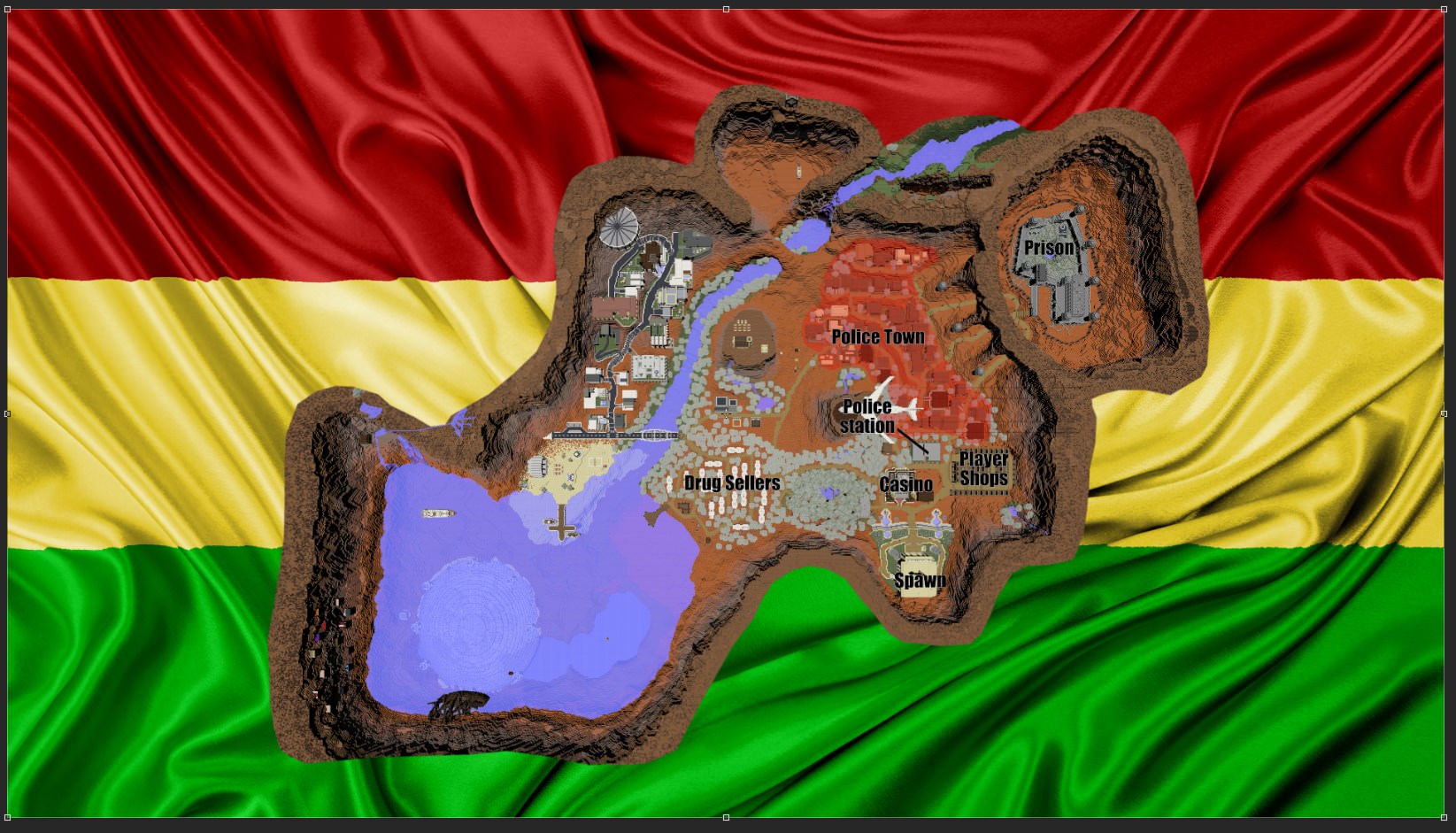 PvP Changes
Due to many complaints about the length of PvP fights last map, we've made some changes. XP bottles are now unobtainable. However, mending is still obtainable and works. Gold apples now have a one minute cooldown, and super gold apples have a five minute cooldown.

Villagers
Because of some villager farms that were being used near the end of last map, we've decided to make these farms almost impossible. Villagers do not spawn anywhere on the map, so the only villagers available are going to be the ones that spawned in the villages when the world generated.

Police Changes
We made some requested changes to police this map, as well as adding a huge...
Continue...
Page 6 of 26
XenPorta 2 PRO © Jason Axelrod from 8WAYRUN.COM