Ban appeals are for when we have made a mistake, or there has been a significant change in the circumstances.
These are the only reasons a ban appeal would be accepted. Appeals for "apologies" or just admitting you did wrong will be instantly denied.

Staff who banned you : GoodChum_

Staff who dealt with you : N/A I was Offline when i was banned

Staff who have warned you previously : N/A

Why do you think you were banned?(what you think the admins thought) : Dakotaa agrees that it was probably because I broke every block in my brewing apartment except for brewing stands, barrels, and cauldrons. I assume that GoodChum_ thought I was buying the apartment to harvest concrete for cheaper than it is worth in the /shop.

What is your explanation of this reason? I was under the impression that the apartment was ours to do what ever we wanted to and it would be reset after our time expired. I did it because I thought it was funny I never had any intent to harvest concrete.

Why should we unban you? GoodChum_ was wrong I was not abusing Police apartments the concrete is still in the chests in the apartments

What measures will you take to prevent this from happening again? Not break blocks in the apartments when I want to brew

How can we trust you again? I've had a relatively clean history except for a few years back when I got banned and I don't want to be banned again.

What else would you like to say to the admins who will review this case? I'm not sure if this is what GoodChum_ was talking about but if it was I did nothing wrong. If not I Guess GG.
L

Staff member
Admin
MVP++
These signs are posted on every floor outside of every apartment in the cop building. 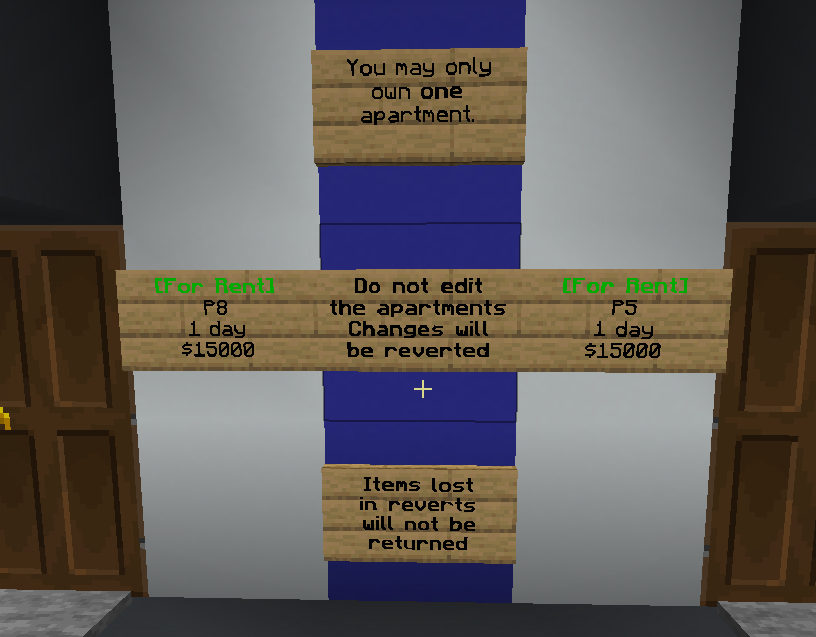 Since this is Goodchum's ban I'll leave the final decision to him, but I would like to explain that the reason you are able to edit the apartments at all is due to a bug with the plugin, which is why we have these warnings everywhere. That you thought it would be acceptable to mine out an entire chunk of a building in spawn is insane.
L

GG Sorry for the inconvenience I'll just wait out my time

No members online now.
Total: 7 (members: 0, guests: 7)
About Us Welcome to MCDrugs! The longest running drug server & pioneers of the gamemode
Server Store Store
Copyright © MC-Drugs 2021. All Rights Reserved. We are not affiliated with Mojang AB.
Top